Solar power subsidy… part 3 and the conclusion of my application. 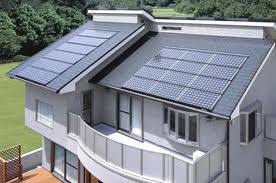 Solar power…. those words make me think of green energy.. no more smoke stacks… electric cars, no nuclear power plants..etc…    These were some of the reasons I applied to get my own home approved for the Ontario Government’s Microfit subsidy program.   Oh, that and the $0.805/ KwH that I would be earning… a $0.70/KwH profit… Sounds like a no-branier, but would that be enough of an incentive for me to go through with the purchase?

Three months ago, I began the process of applying to the Ontario Power Authority for approval to the Microfit program and was approved.   I applied for approval to the Local Distributor Company (LDC local hydro company)..in my case it was Burlington Hydro.   They sent out an Engineer to ensure my house would qualify….. good news is that I was approved…  Everything was set.  I just needed to get a site assessment for my our peace of mind to see if my house was positioned correctly to take advantage of the sun’s rays.

I contacted an installer and supplier… They did a free site assessment…(most installers and suppliers wanted to charge me a fee)…  My house was not positioned to achieve optimum efficiency…. I would achieve only achieve 72% efficiency out of a recommended 90%…. Cost to install 30 high-end panels would be $45k.    My expected annual return would be around $5,500.…

End result…it would take me almost 10 years to recover my investment… but then again, I would have that 20 year govt contract selling my power at $0.805/Kwh compared with paying $0.11/KwH…

So after several dozen hours spent researching, applying, meeting with inspectors, installers, etc and 3 months later, my decision is to not move forward with the install.   There are many reasons but it seems to me that we still don’t know what effect this would have on the value of our homes…. Will prospective buyers like the panels in 3, 5, or 10 years?   Will the panels be out of date when I go to sell?   There just seems to be too many unanswered questions at this time…

The installer told me that my approval from OPA is good for 12 months… and maybe the price of the panels will drop enough that it could make sense for me to get the installation done…. but right now, a 10 year payback it way too long….   I’ll update you further should I have any new information…

My advice to anyone that is looking to participate is to do your research… there is a lot of data to be digested…  Buy Canadian… don’t just go with the lowest cost panels… buy quality.. we have some harsh weather in Ontario… Contact the Canadian Solar Industries Association for some referrals…. seek out a reputable installer and supplier… Get recommendations directly from the manufacturer….

If you want more info, just drop me a line and I’d be happy to share more details of my research.

On May 25th, I submitted my own application for the Ontario Power Authority’s (OPA)Microfit program.   The program was created by the Provincial Liberal govt as a way to encourage homeowners to use alternative, clean source of energy such as sun, wind, water and bioenergy. Green energy.

Solar power is the one that interests most people, including myself.   The deal is simple.  The govt will pay me $0.802 kWh for 20 years.   Compare this with the $0.07 to $0.10 kWh that most homeowners pay for normal household electricity and you can see this can be a very lucrative incentive to ‘get off the grid’, as they say.     That could generate around $7,000 per year for me.    But then again, it’s gonna cost me around $30,000 to $40,000 to install the solar panels and hook up to local hydro company….  Still, the payback is around 8 to 10 years… after that, it’s all profit and eventually, I can make and use my own electricity.

Back to my application….. It’s being processed by the OPA and it could take upwards of 45 days to get it processed.   I have also submitted my application to my local hydro provider, Burlington Hydro.   They also must approve my home for connection and hook up.  I’m now in a race against the election clock.   Yes, another election this fall…..  This time it’s a Provincial election.  The Conservative govt has made it clear that if they win, they will probably scrap the program as it’s too expensive in their mind.   But all existing applications and contracts will have to be honored no matter which political party is in charge.

And so, I wait…   stay tuned for more details as they unfold…

Oh, and by they way, I do see why the Conservative govt would want to scrap the program…  Up until last December, there were a number of companies that popped up and offered FREE installation of the solar panels, in return for 85% of the revenue for 20 years…and then there are the bigger farm properties…  I took a drive up to Tobermory a few weeks ago.   Along the road were dozens of these strange looking barns with no walls and  just a solid frame and roof… They were huge!  The roofs were covered with solar panels…  These buildings were clearly designed for one purpose…..to attach the solar panels and  produce electricity… and to generate revenue…..

This is not what the program was intended for… The program was created for property owner to produce their energy…not over produce and sell it for an exorbitant profit…. We can probably guess that once the 20 year guaranteed govt contract is up, these huge barns will probably collapse and disappear….

It’s these sort of loopholes that infuriate most of us…  The govt seems to have closed the gaps now but not before many have taken advantage of the offer and are now generating untold $$$thousands and probably $$$millions in some cases per year….  Some forward thinking could have prevented and minimized the losses.

We’ve heard about ‘green’ programs for some time now.  I thought we’d take a look at one of these programs… this one is of particular interest to me as I am considering participating with my house.

It’s called the Microfit program.   I’m looking specifically at the residential program…The deal is this.  You install the solar panels on your roof.  The solar panels produce electricity. The electricity is then sold back to your hydro provider…and here’s the real carrot…the Ontario Provincial govt will guarantee to buy the electricity from you for 80.2 cents Kwh for 20 years!!!...

Why is this good?  Currently, the price of electricity costs us between 6 cents and 10 cents Kwh depending on when you use your electricity…  (peak and off-peak hours…. another cash grab from our govt but that’s a discussion for another day).

So, if you haven’t figured it out yet,  you are making a profit of around 70 cents per Kwh….  They say you can produce around 10,000 Kwh per year… it depends on how much sun your roof gets.  That means you could potentially earn around $8,000 to $9,000 per year.  And the reason for the huge payout is to encourage homeowners to take part in green renewable energy.

So what’s the catch?   The panels are not cheap… look to pay around $40,000 for the panels…. And that’s why the govt is paying out 80.2 cents Kwh… to entice you..  You also have to apply to get approved for the Microfit program.  And like so many govt programs, it’s not an easy process.  An application must be completed. A sun/shade test is done to see if your roof can produce enough electricity.  If that works, then you need to apply to your local Hydro provider (Toronto Hydro, etc) and they will also need to accept your application to supply electricity to their grid.

I’ve only done some preliminary research and prices seem to be dropping as technology and more competitors get into the market.  $40,000 is not a small investment but definitely worth looking into with a 20 year guarantee from the govt at 80.2 cents Kwh.   Then there’s the environmental reasons…It’s green, renewable energy… we all want that… Eventually you could be right off the grid and supply your own energy.

Some words of advice…. with a Provincial election coming up this fall, this program could get taken off the table…Look for a reputable Solar energy company and get referrals.  If it sounds too good to be true, then it probably is.  Stay away from companies that say they will give you the panels for free and pay you 15% of the energy produced.  The govt recently stopped allowing the leasing of residential space.

By the way, the PC govt says they would scrap the Microfit program if elected…but they would have to honor existing agreements…